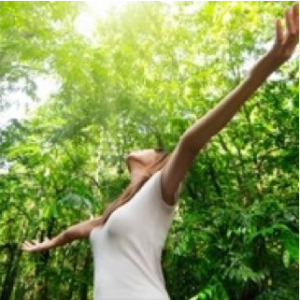 Laurie H. couldn’t imagine working with a wellness coach. In fact, she didn’t even know what a wellness coach was — until one transformed her life. A compulsive overeater, Laurie had struggled with her weight since childhood. She went on diet after diet, and was finally ready to join Overeaters Anonymous when a friend told her about wellness coaching. Laurie  jumped at the chance.

After her first appointment, Laurie was so impressed that she decided to do more 1:1 coaching . She insists they were worth every penny. Although Laurie has made significant improvements to her diet and lost weight, she says she’s gained something far more important. Through the coaching process, Laurie discovered that losing weight wasn’t what she needed most. She longed to be at home with her family. So after debating the options, Laurie changed jobs and became a much happier part-time employee where work was a joy every day. She’s never been happier. “My goal didn’t change, but how I got there did,” she explains. “The time and exploration of the right food plan helped me explore myself and my wants in life.”

Joseph wanted to master the yoga poses, but struggled in a class of many students with the teacher not giving detailed instructions.  He saw me in order to focus on the specifics of yoga poses and to gain confidence in their implementation.  Within several months, Joseph connected freely with each pose, gained strength and improved his flexibility.  He was very pleased that he experienced a greater confidence in his yoga classes.  “I know what’s happening in class now. I do not fall behind anymore while trying to figure out what the yoga teacher is telling us to do.  It feels great to know what I am doing and to just do it!”